Tourney for a Cause

The NTC Annual Club Tennis & Pickleball Tournament has been a tradition for 30+ years!

These unprecedented times have brought these changes:

Thanks again to Angeli's Restaurant for their generous donation towards curing ALS !

Most recently, students at Kingsley, Scott, and Steeple Run Elementary Schools have benefited from NTC professionals, including 10 & Under specialist Barb Rueth, to lead their P.E. classes. 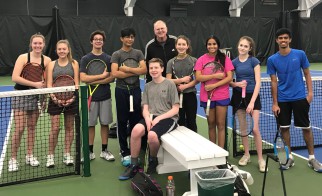 NTC's two high school doubles Junior Team Tennis teams completed their WSL season last weekend with a fun, yet competitive Team Tournament. (see picture). Now the boys are all set for the high school boys season. The girls may still compete is a spring league. Congrats to the teams for a successful season, and to Coach Hugh Flanagan who led the charge!

Our other Junior Team Tennis teams are past the half way point and NTC's teams have competed well in the West Suburban League. NTC has teams in the following divisions entered into competition:

Dates and Locations for the West Suburban League Championships

(End times listed include final rounds, this may change depending upon how many teams enter the draw)